Pattaya is a resort city in the southeast of Thailand. Hundreds of thousands of tourists from all over the world annually fill its hotels, beaches and entertainment centers. There are many tourists from Russia and CIS countries among them. After swimming in the warm sea and sunbathing on the white sand, you want new experiences.

Pattaya is sometimes referred to as the "sin city" and offers a wide variety of activities. An excellent option for an unusual holiday is provided by the Mimoza shopping and entertainment complex, where you can spend an unforgettable day from morning to late evening. 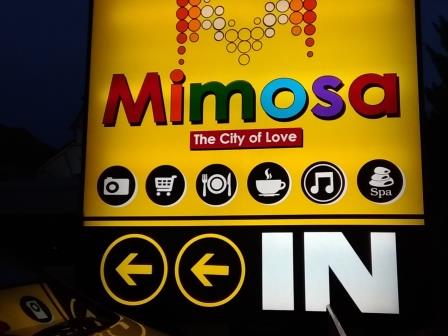 A bit of history

"Mimosa, Pattaya" (Mimosa, Pattaya) has a second name - "City of Love". This name did not appear by chance, because the opening of the complex was timed to coincide with Valentine's Day on February 14, 2013. In the concept of the complex from the very beginning, the goal was to create an atmosphere of love and romance. The development and implementation of the project required an investment of 1 billion baht.

The team of designers and designers of "Mimosa" went to France, where the city of Colmar with its peculiar medieval architecture was taken as the basis. The style developed as a result of the complex turned out to be so successful that success came almost instantly, in the very first year, and since then Mimosa has remained one of the brightest and most popular places in Pattaya.

The intricate routes of small cobbled streets, small colorful houses, ponds with black and white swans, picturesque canals and romantic bridges are reminiscent of the landscapes of various ancient European cities. "Mimosa" disposes guests to long walks: you never know what awaits you around the next turn. 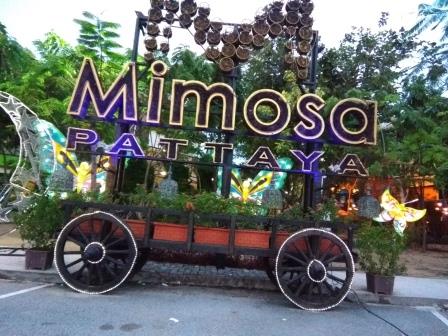 Today "Mimosa" in Pattaya covers an area of about 50 hectares (38 acres) in the Na Jomtien area. It is difficult to establish the exact number of boutiques, other shops and temporary trading floors in the mall. Different sources call different numbers, from 300 to 350. To them we must add a supermarket, restaurants, cafes, pizzerias, massage parlors and a spa center.

SEC "Mimosa" offers tourists a rich entertainment program. On the territory there is a cinema with 4D films and cartoons, a massive game of racing in Formula 1 cars, a museum with paintings that create a 3D illusion. For nature lovers, a huge oceanarium and a zone inhabited by exotic birds are open, of which only cockatoos and macaws will be familiar to us. There is a special playground for children.

However, all entertainments serve only as a prelude to the main show of the Mimoza shopping mall. This is a bright and colorful performance of transvestites. 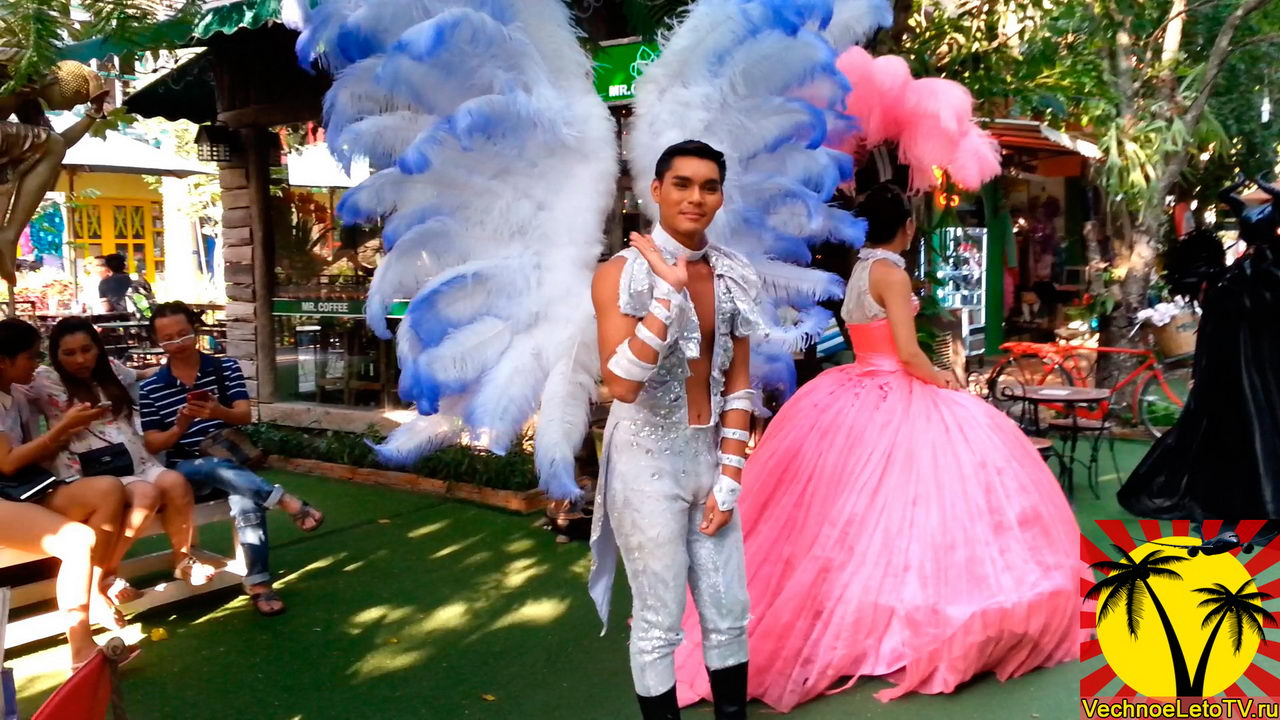 How many transvestites are there in Thailand

It may seem that there are quite a lot of transvestites in Thailand: sources give the official figure of 10 thousand, unofficially there are much more. However, the first superficial impression is deceptive.

In percentage terms, for a country with a population of 70 million people of the third sex (as they are called in Thailand), amounting to several tens of thousands of people, is no longer such an impressive figure. This phenomenon becomes noticeable only in large tourist cities, where transvestites make up a certain social stratum. There are no more transvestites in other regions of Thailand than in any other country in the world.

If you approach the phenomenon from a scientific point of view, then you need to designate the terms, otherwise confusion cannot be avoided. It is necessary to distinguish between transsexuals, that is, those who have changed their sex with the help of radical surgery and are forced to take hormones for life. The reason for the transformation usually lies in the psychological discomfort arising from the feeling of a person's contradiction with his anatomical sex.

Transvestism is associated with behavioral characteristics of the individual, which can also have a psychological or social basis. The word transvestite itself comes from the Italian word travestire, and it translates as "dress up, dress up." In the theater, there is a role of a travesty: this is the name of actresses who play the roles of boys. By the way, one of the charges on the basis of which Jeanne d'Arc was burned was the fact of wearing men's clothing. 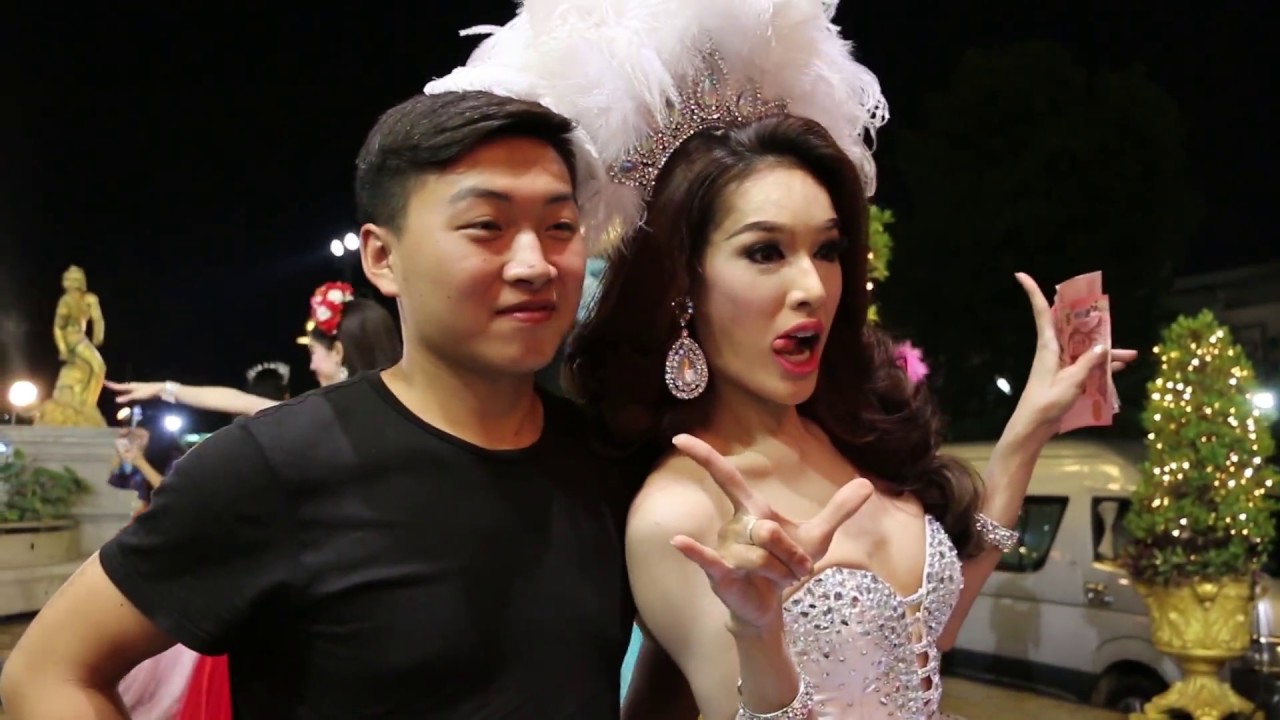 Transvestites are people who dress up as the opposite sex for some purpose. If we talk only about men, then they use makeup, walk in high heels, act like a woman, try to speak in a high female voice. 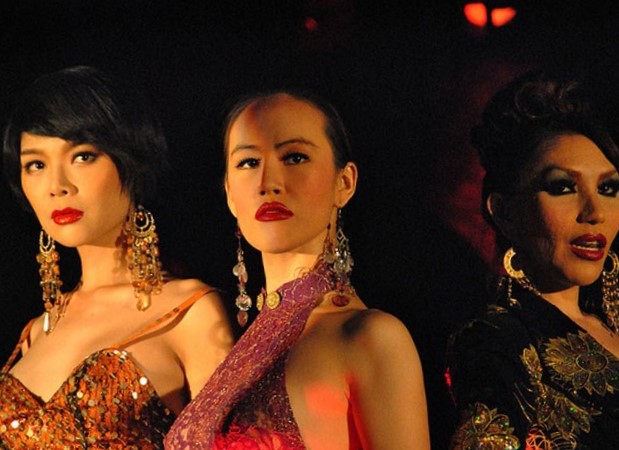 In Thailand, it so happened that the word transvestite has taken root in colloquial use, without any terminological differences (they say “trans” or even “transformer” for short). There is also a local name for men who have become women - "kata", or the English expression "ladyboys" is now often used. By this is meant a representative of the male sex, who is not yet completely a woman, but is no longer a man. There is also the Thai name "phet thee sam", which means "third sex". 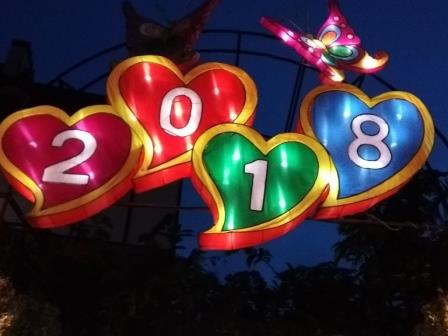 Experts who are seriously involved in the issue argue that in Western languages it is difficult to find an equivalent to Thai definitions, which reflect ideas about the traditional role of the third gender in Thai culture and mentality.

Most Thai katoys live in big cities. Many transvestites work in the service industry, and not necessarily the sex industry. Among them are a lot of waiters, bartenders, masseurs, sellers. Gradually, transvestites became in demand for office work, recently they even began to take Katoev as stewardesses. Tourists, on the other hand, mostly encounter workers in the entertainment and sex industries. Among the katoys there are famous singers, dancers, actresses. For many years, national beauty contests have been held for representatives of the third sex.

Katoys have to work a lot, because their lifestyle requires serious money. Plastic surgery on the face and chest on average cost from five to ten thousand dollars. Hormone therapy costs $1,000 a month. Prestigious clothes, cosmetic procedures, make-up are expensive. For everything in this life you have to pay and pay. Statistics say that the average life expectancy of Thai transvestites does not exceed 45-50 years.

It is unlikely that tourists think about the problems of life of the Thai representatives of the third sex when they see them on the streets or applaud the show of transvestites with pleasure.

Transvestites give special colors to the Mimoza shopping and entertainment complex. They walk the streets in bright clothes, take pictures with tourists for 100 baht (a little over three dollars). But the main attraction for tourists in "Mimosa" is a large entertaining show program of transvestites. On the special stage, everything goes pretty well, there are a lot of children at the performance.

Directors-producers take into account the target audience. Programs are compiled competently, the numbers are replaced one after another, not letting the audience get bored. Performances go to the phonogram, but this does not bother anyone: this is not a vocal competition. But the dance part of the program is saturated and makes a vivid impression.

Numbers alternate, which go both to world hits and to national Thai music. Each number takes place in its scenery and spectacular costumes created for it. The outfits of the participants often change, as more and more performers take the stage during the program.

One of the local guides owns a phrase that is often repeated in Pattaya: "The most beautiful girls in Pattaya are transvestites." Katoi on stage move emphatically feminine. Looking at their faces, it's hard to guess that these are not real girls.

Spectators tend to take their seats 30-40 minutes before the start of the performance in order to better see all the details. The one who sits in the front row may be lucky enough to become a participant in the show. The performers of the number sometimes approach the viewer, begin to flirt theatrically with him, sometimes they can even give an innocent kiss on the forehead. The delight of such "liberties" captures all those present. Some numbers contain humorous notes, and the audience laughs contagiously with childish pleasure. A good view is given to the audience located on the second floor of the buildings that surround the stage. 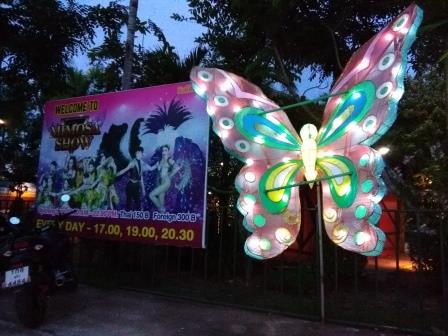 The stage where the show takes place is arranged in the open air and equipped with a fountain. It starts working as the performance progresses, adding emotion to the performance. Programs change from time to time depending on the composition of the participants, sometimes they even arrange fireworks. Several performances are given every day, and the last show starts at nine o'clock in the evening, when it is already getting dark.

The evening show will be a little different from the daytime show, but the impression is completely different. The water jets of the fountain soar high up, the stage and everything around is illuminated with all the colors of the rainbow. Each number of the show gets its own lighting design. The riot of colors leaves no one indifferent.

After the end of the performance, the audience can take pictures with the participants of the Mimosa show. If you were on vacation in Pattaya and did not go to the Mimosa show, what would you tell your friends at home who would start asking about Thai transvestites?

Mimosa is easily reached from the city center by songteo (tuk-tuk), a type of local passenger pickup truck that runs on a specific route. Such a trip will cost 20 baht.

The cost of a taxi depends on the place of residence in Pattaya and the distance to Mimosa, however, the minimum price for a trip starts from 200 baht one way per car. A taxi is much more convenient and cheaper if a company of 3-4 people is going to go. 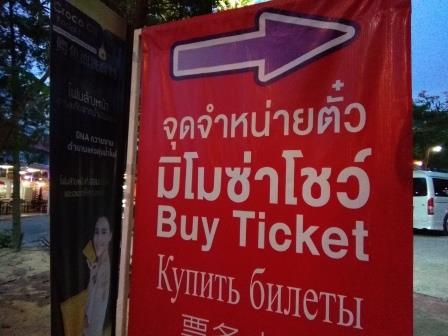 Entrance ticket to the shopping center "Mimosa" costs 300 baht. It is not recommended to buy tickets from the hands of dubious individuals who offer them right away in the parking lot or far from the main entrance. Official cash desks are installed at the entrance to the complex, they work all day without a break.

Guests of the Ambassador Hotel are also entitled to a discount. To do this, you must present a hotel card or room key. 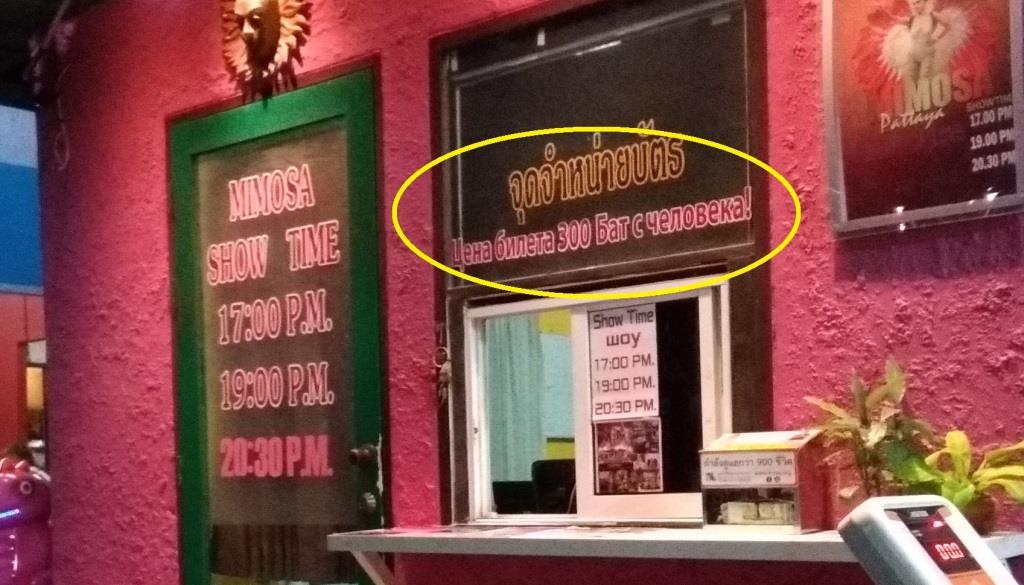 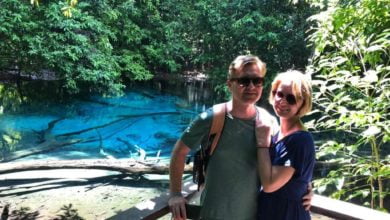 The Pearls of Krabi VIP Excursion 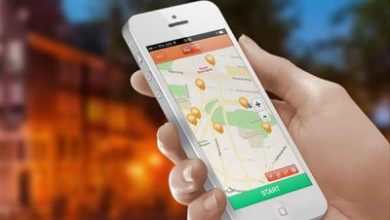 Saving on sightseeing tours with an audio guide 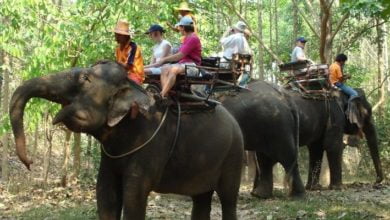 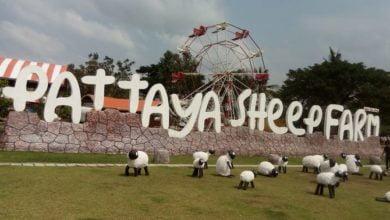 A Sheep Farm in Pattaya: What's So Interesting There 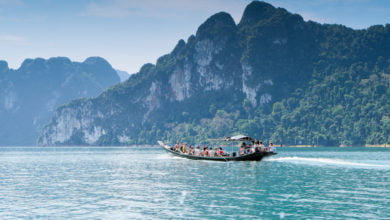 Excursion to the paradise islands of Phi Phi 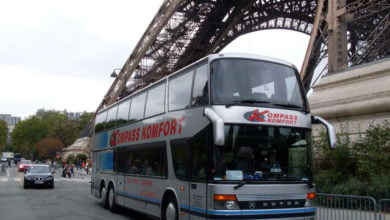 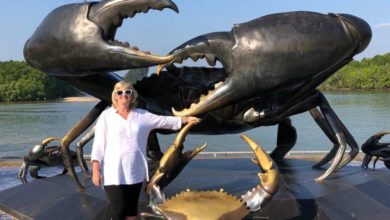