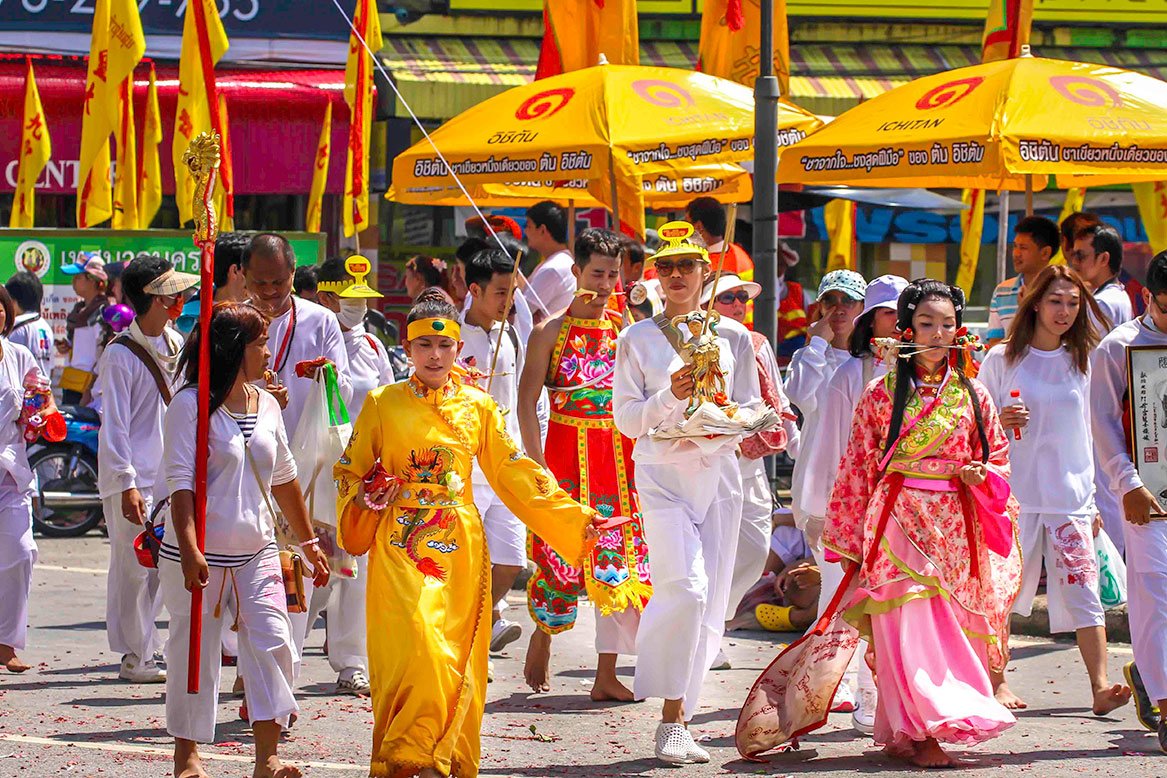 Like most Eastern countries, Thailand attracts guests primarily with its centuries-old traditions and extravagant festivals. Therefore, going to this country, tourists should know what festivals or celebrations fall at the time of their trip in order to fully appreciate the culture of Thailand.

In general, all holidays in Thailand can be divided into three large groups:

Of course, they are celebrated in different ways. In order to experience the local traditions and celebrate one of the Thai religious festivals, visitors are advised to go to the outback. Well, during the grand festivals, of course, it is better to visit tourist places and large cities, where organized large-scale performances, designed for large audiences.

The Thais are a cheerful nation; not a month of the year goes by without a holiday.

January 1 is New Year's Eve. As with Europeans, the fun for Thais begins on the first day of the year, when Thailand celebrates New Year's Eve. Here, however, it should be noted that, unlike the Europeans, the people of Thailand celebrate the New Year three times: the European style (January 1), the Chinese style (at the end of January) and the Thai style (in April).

On January 14, Thailand celebrates Children's Day. This event is celebrated quite grandly with fairs, concerts and entertainment all over the country, the main characters of which are just children.

January 16 is Teacher's Day in the kingdom. It is much more modestly celebrated, and, in fact, does not differ from the European holiday.

March 13 is Thai Elephant Day. On this day elephants, which are considered the national animal, are honored.

March 17 is Muay Thai Boxing Day. The holiday is accompanied by noisy fun and sports competitions.

April 6 is Chakri Dynasty Day. This holiday is national and is celebrated on a large scale. Representatives of the royal dynasty, which has ruled for more than two hundred years (namely since 1782) are given wreaths of bright flowers and thanked for their care for their people.

On May 5, the kingdom celebrates Coronation Day, during which military personnel from the Navy and Royal Army march through the main streets of Thailand.

May 13 is the feast of the first furrow. On this day, many centuries ago, the priests predicted the harvest and the weather for the next season. Now it is simply a tribute to tradition, as well as the official beginning of all work on the land. It ends the cycle of spring holidays.

June 4 - Birthday of the Buddha. It is one of the most significant summer holidays. It is traditionally called Visakha Bucha. It is celebrated rather noisily, but in order to get into its essence, it is better to go far away from the crowd, to small villages, where this day is still held in accordance with the old traditions.

July 30 is the Day of the Founding of Buddhism. It is believed that it was on this day that the Buddha first preached to his disciples. In general, summer is not as rich in festivals as the other seasons.

August 2 is the beginning of Lent. The beginning of the month is the first day of fasting, which for Buddhists lasts three months. On this day it is customary for nuns to give candles.

On August 12, all of Thailand celebrates Mother's Day, coinciding with the Queen's birthday.

October 23 - Memorial Day of Rama the Fifth. Of course, Memorial Day cannot be considered a real holiday, but still, for Thais October 23 is considered a very important date. During his reign King Rama V of Thailand managed to win the love of his subjects. Therefore, every year on this day the Thais honor his memory.

Early November - Loi Kratong. Feast of Water and Light - that event is more joyful and colorful, but you will learn more about it by reading the article to the end.

December 10 is Constitution Day in Thailand. It was adopted in 1932, and since then the day has been celebrated annually at the state level.

This is what the list of major holidays in Thailand looks like. But the most important ones for the country are worth talking about in more detail.

April 13 - Songkran. To begin with, there is a unique holiday called Songkran. This is the name of the Thai New Year, which falls on April 13 and lasts for several days. On this day, visitors to the kingdom, walking on the streets, should be extremely careful: right in the middle of town you may be poured cold water, and even sprinkled with colored talcum powder! 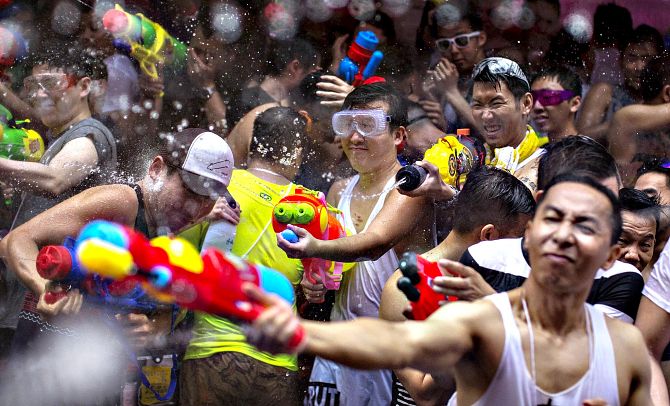 ▣ Songkran is the New Year's water fights in Thailand.

It is believed that water brings blessing, so this attitude does not mean disrespect to foreign guests, but on the contrary - respect and wishes for happiness.

Tourists who want to take part in this colorful action, should pick up in advance clothes that do not feel sorry (anyway, by the end of the day the outfit will be painted in all the colors of the rainbow talcum powder) and plastic purses, which can be put means of communication, documents and money that they just do not get wet.

But watering is not the only tradition. On Songkran, Thais spend time with their families, visiting the temple, and preparing traditional treats. The family meal that evening begins with the washing of the statue of Buddha, which stands in every Thai home, in water with jasmine and rose petals. 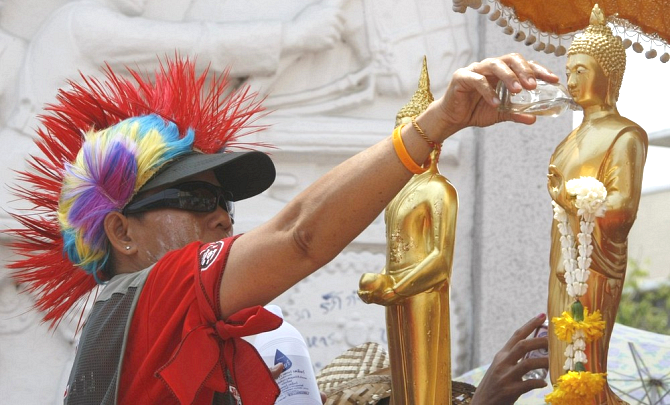 ▣ It is believed that the ritual of ablution attracts all that is good in life.

August 12 is Queen Sirikit's birthday. This is the second important and really worthy holiday to visit. It coincides with Thai Mother's Day, so you get a double dose of positive emotions and impressions when you visit Thailand in the middle of August. 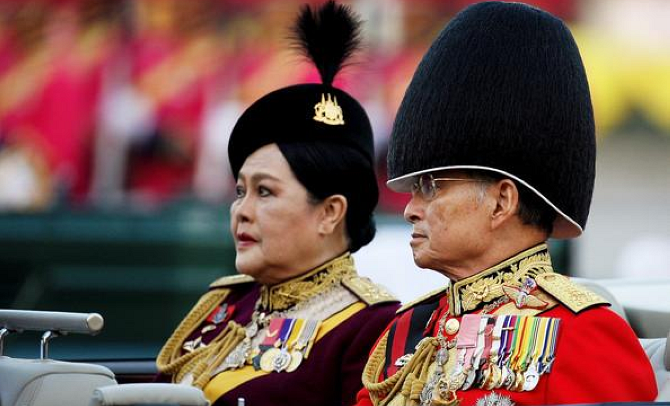 ▣ Events take place all over the country, and this day is the official holiday.

The streets in honor of the queen are decorated with flowers, royal symbols, sky blue flags and portraits of the birthday girl. In addition, every woman on this day can get a nice gift decorated with jasmine, because this is the flower in Thailand is considered royal.

Thailand's celebration of the spirits of water and light, known as Loi Kratong, is no less beautiful. Both locals and visitors to the kingdom are fascinated by the thousands of golden kratongs (leaf boats) floating on the rivers. Traditionally, they are made from banana leaf. We can only wonder how the local craftsmen turn simple leaves into works of art, creating real floating palaces in miniature. Preparations for this holiday take several days or even weeks. 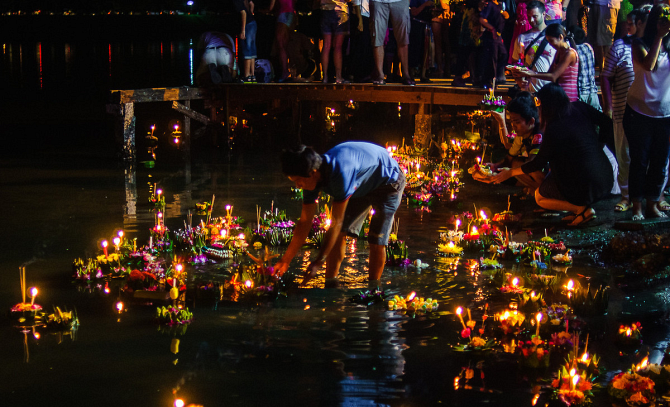 ▣ Loi Kratong is the festival of water and spirits.

But when darkness finally arrives, crowds of people go to the banks of rivers or seas with their kratongs and float them downstream. It is believed that the Kratongs are able to unite the hearts of lovers. Therefore, most often they are sent sailing with their soul mate. On this night, the sky sparkles not only with stars, but also with hundreds of lanterns, launched in different cities of the kingdom. Before they release their lantern into the air, Thais make a wish that should certainly come true. 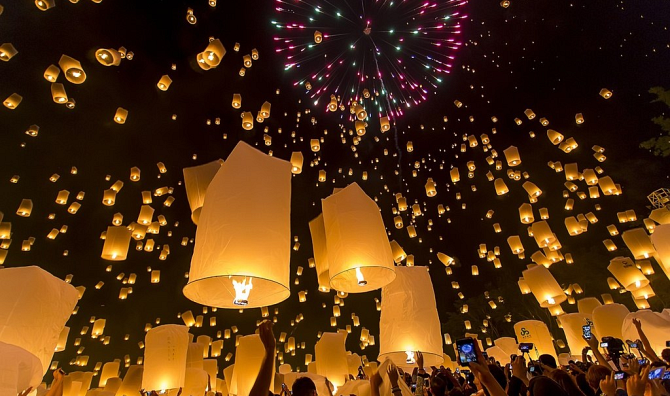 ▣ It is believed that a celestial lantern released into the sky will take all worries with it.

And the last of Thailand's most important holidays is the birthday of King Pupimon Adulyadej. It is celebrated beginning on December 3, when members of the Royal Guard once again solemnly reaffirm the oath they have taken to His Majesty. 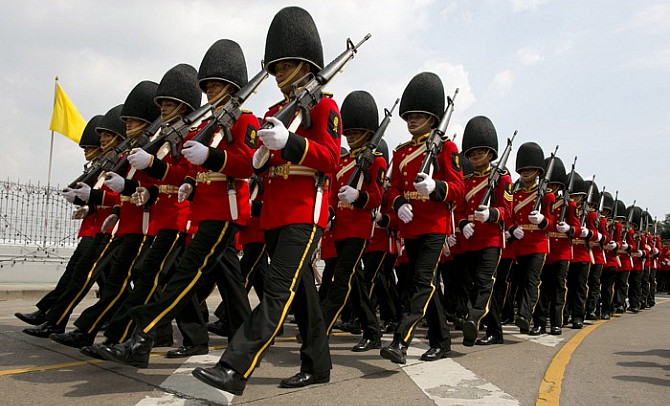 On the 5th, a general celebration begins. All government buildings and main streets are decorated with flags, portraits of the king and colorful illuminations. If you come to Thailand on this night, you will be amazed by the fabulous beauty of the city dressed up in honor of his favorite ruler.

Just as the Queen's birthday coincides with Mother's Day, December 5 coincides with Father's Day. This coincidence pleases Thais, who consider the royal family as the father and mother of their nation.

A separate mention in the story about the Thai holidays deserve and local festivals. They are held on a grand scale, and not to visit at least one of them, you will lose a lot.

The most famous, of course, is considered the festival of flowers. It is held in the city of Chiang Mai, whose name literally translates as "a lot of flowers. There are a lot of flowers in this city, especially in February, the month in which the Oriental countries begin to bloom. 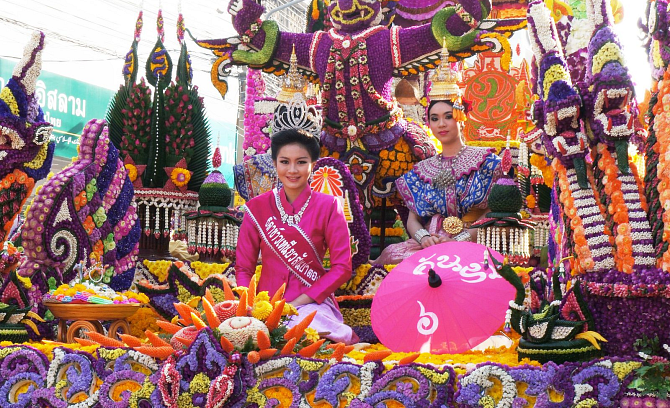 ▣ The Flower Festival is one of the most beautiful and impressive events in Thailand.

The first Friday of February is a great occasion for local gardeners to show off their achievements and participate in various contests and exhibitions. Thousands of men and women take part in the traditional processions on this day, and every tourist is welcome to join in.

Tourists will also be interested in the annual pineapple festival held in the Thai province of Lampang. The celebration falls at the beginning of June (the 2nd of June), and in addition to the opportunity to eat plenty of tropical fruits, each participant gets a chance to take part in the mass fun. 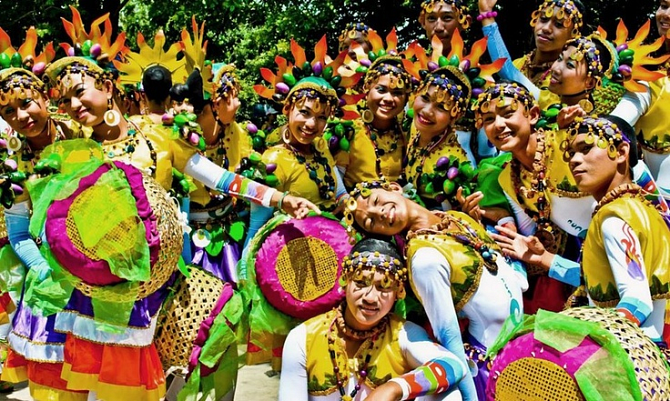 The cheerful Thais dance and sing for three days. And the festival ends with competitions, the main of which is the competition for the title of "Miss Pineapple".

The vegetarian festival is also an original local event. It is recommended for those with strong nerves, as the most popular entertainment during this festival is considered to pierce their own skin. It's strange how many people want to get piercings in the most unexpected places. 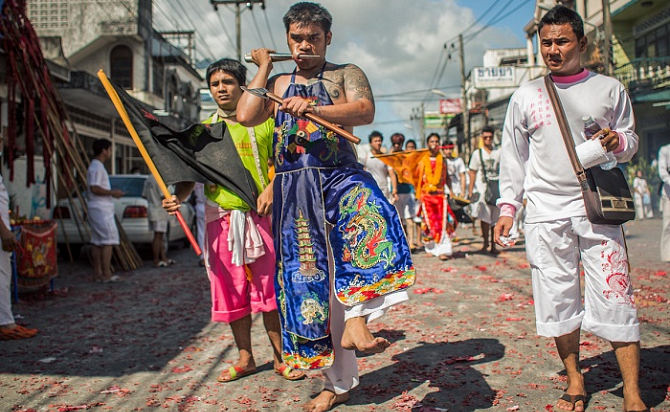 In addition to this unusual entertainment, during the vegetarian festival you can try different fruits and vegetables and even take part in a tomato battle.

Also worthy of attention is the Kite Festival, held annually on March 10. It gathers lovers of this type of entertainment from all over Asia. Here you can participate in sports competitions in kite flying or just stroll through the numerous exhibition rows, looking at real masterpieces of kite flying created by the hands of painstaking Thai craftsmen. 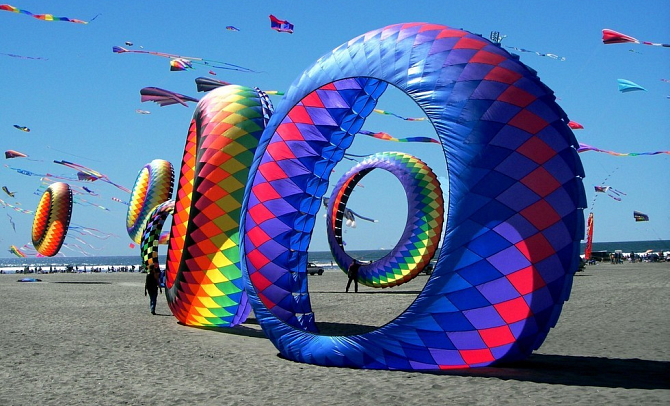 A nice addition to the festival are widely organized banquets, without which no important celebrations in Thailand.

Another colorful event that many people come to see is the rocket festival. It is held at the end of May, before the beginning of farm work. In various provinces of northeast Thailand, villagers make huge rockets that are launched into the sky during the festival, as it is believed to help speed up the arrival of the rainy season. 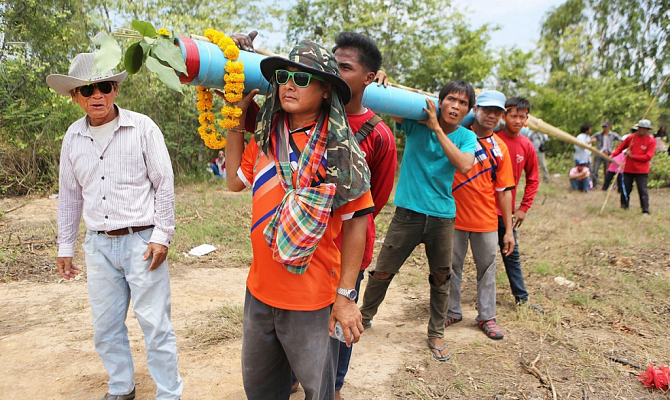 The festival has its origins in the legend of Vassakan, the Thai god of rain. Organizers of the festival also bring a competitive spirit, giving several teams the opportunity to test whose homemade rockets can fly higher. Before the rockets are launched, their owners make toasts wishing prosperity and the earliest possible arrival of the rainy season. This "explosive" festival is accompanied by various theatrical performances and treating everyone to traditional Thai food and drink. 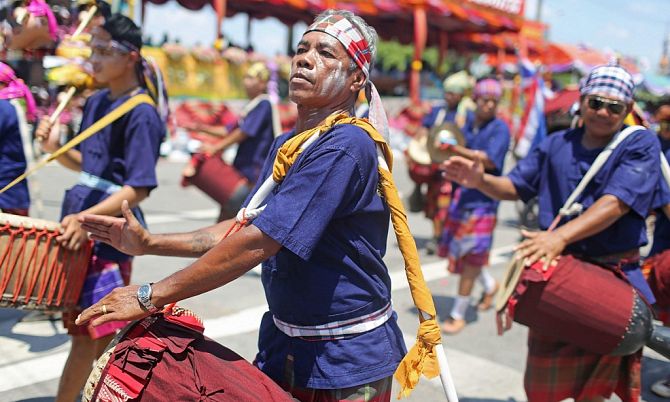 ▣ A theatrical production in honor of the holiday.

As you can see, there is a lot to see in Thailand. The variety of holidays and festivals in this kingdom is really fascinating. But when going there for any celebration, it is worth to keep in mind a few important points.

But all these minor inconveniences are nothing compared to the experience that each of the Thai holidays and festivals leaves behind. 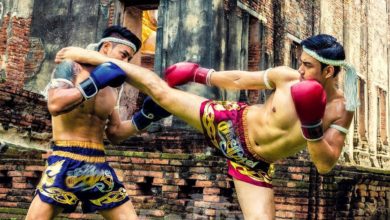 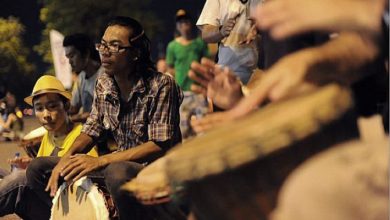 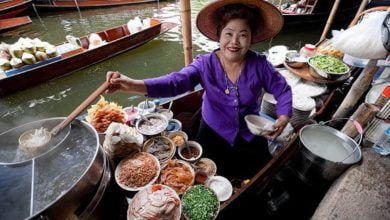 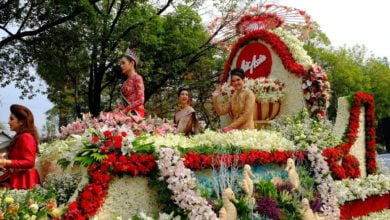 Flower Festival in Thailand - the legend and peculiarities of the holiday